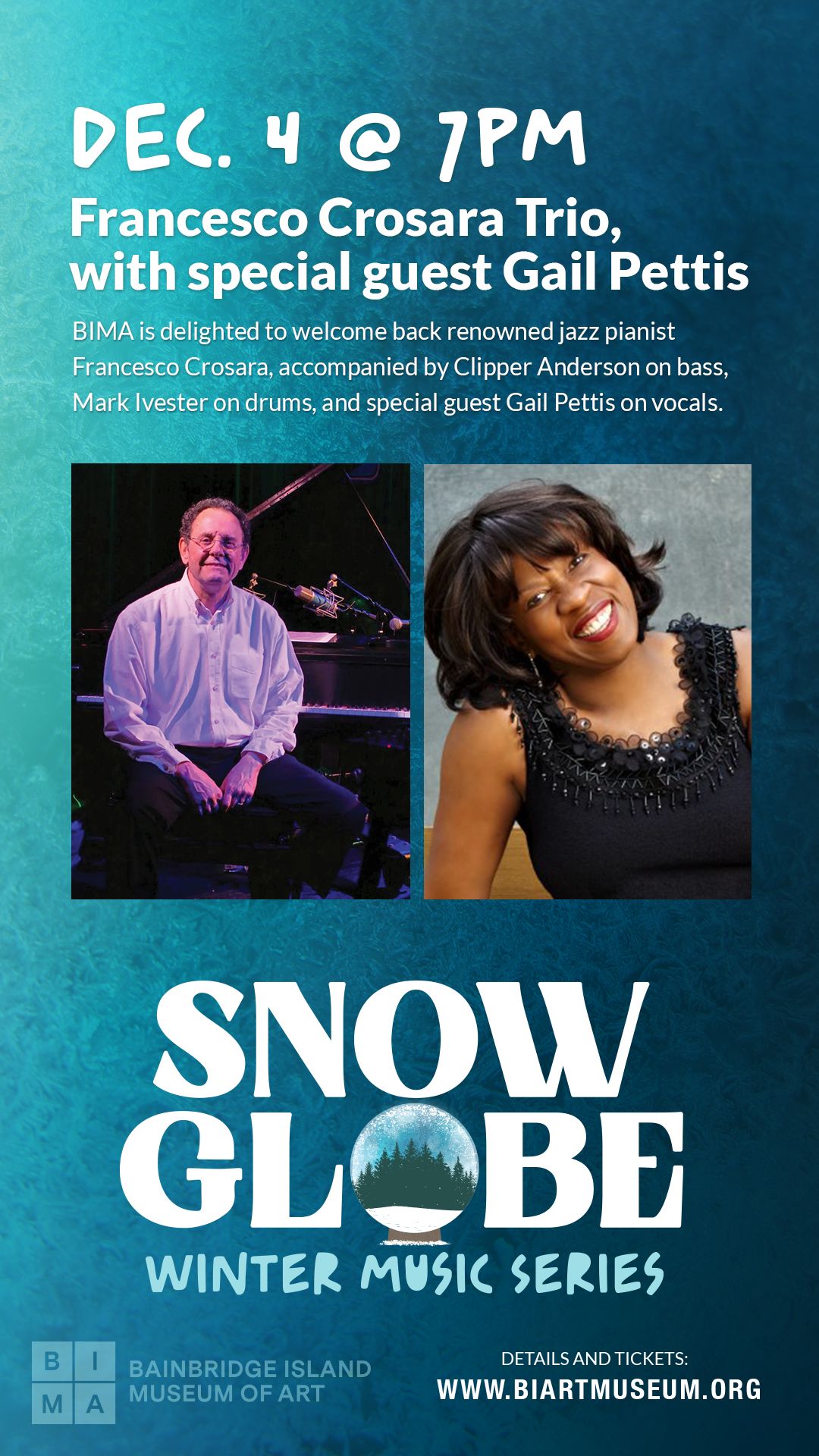 The Bainbridge Island Museum of Art is delighted to welcome back renowned jazz pianist Francesco Crosara, accompanied by Clipper Anderson on bass, Mark Ivester on drums, and special guest Gail Pettis on vocals. Crosara will present original compositions and choice standards rearranged in his own lyrical and exuberant style. Concert presented by the Bainbridge Island Museum of Art as part of the Snow Globe Winter Music series. (www.biartmuseum.org)

FRANCESCO CROSARA: Originally from Milan, Italy, Crosara’s music melds an impressive mix of jazz improvisation, a romantic vein from his classical training, along with Latin influences. Crosara stands among the European-bred jazz greats, performing over the years with the likes of Lionel Hampton, Freddie Hubbard, Roy Hargrove, Richie Cole, Bobby Shew, Ira Sullivan, Don Menza, Von Freeman, John Heard, Gabe Baltazar, Mayuto Correa, Bruce Forman, Barbara Morrison, Earl Palmer, Lilian Terry, and more. His recordings have featured a multicultural and international array of musicians. He has performed at festivals and venues across the USA, Japan, Canada, Mexico, France, Spain, and Italy. Since 2017, the Pacific Northwest can claim Crosara’s talents, too, as he’s demonstrated an eagerness to contribute to the local scene. Francesco was selected to perform at the 2021 Earshot Jazz Festival in Seattle and has been featured two years in a row in the trend setting Earshot Jazz: The Second Century series for his bold and innovative music composition and video editing work. Equally adept with acoustic and electric jazz concepts, Crosara routinely headlines trios and quartets with the area top musicians.

GAIL PETTIS: Named ” 2010 Northwest Vocalist of the Year,” by Earshot Jazz Society, (also 2007), Gail’s rich, warm vocals and understated phrasing have been described as “deliciously soulful” by Cadence Magazine. Gail’s live performances have been described by Earshot jazz as going “…from strength to strength, performing a winning, crowd-involving style of vocal jazz.”. As artist-in-residence at the Amersfoort Jazz Festival in the Netherlands in 2006, she was featured artist with the New Manhattan Big Band, also Eddie Conard and the Dutch Jazz Cats on the mainstage and smaller combs in venues in Amersfoort and Harderwijk. Included on this tour was a stop in Kobe, Japan to perform as a guest artist at KAVC Hall as First Place winner of the Seattle-Kobe Female Jazz Vocalist Audition. She has also performed at the Gene Harris Jazz Festival in Boise, Idaho, Jazz at the River Festival in Eagle, ID. Most recently, Gail completed Russian tours in the spring of 2015, performing in Moscow, St. Petersburg, Novosibirsk, Ufa, Ivanova and Perm and returning in the summer for a tour anchored by the White Nights Jazz Festival.

CLIPPER ANDERSON is a bassist, composer, studio musician, performer, vocalist and educator. He plays at jazz festivals throughout the Unites States and Canada and has appeared on numerous recordings. Clipper has worked with some of the biggest names in contemporary jazz including Michael Brecker, Arturo Sandoval and Buddy De Franco. Clipper is an annual guest artist at the Buddy DeFranco / University of Montana Jazz Festival and the Blaine Jazz Festival. He is currently on the jazz faculty at Pacific Lutheran University.

MARK IVESTER is a versatile drummer and percussionist who is currently on the faculty at Pacific Lutheran University. Mark has performed with numerous jazz artists of international stature including Larry Coryell, Freddie Hubbard, Diane Schuur, Mose Allison, Charlie Byrd and Eartha Kitt. He has also performed with the Honolulu, Spokane and Walla Walla symphony orchestras. He earned a Bachelor of Music degree from Eastern Washington University and did undergraduate and graduate work in ethnomusicology at the University of Hawaii that included field study in gamelan music on the island of Java.