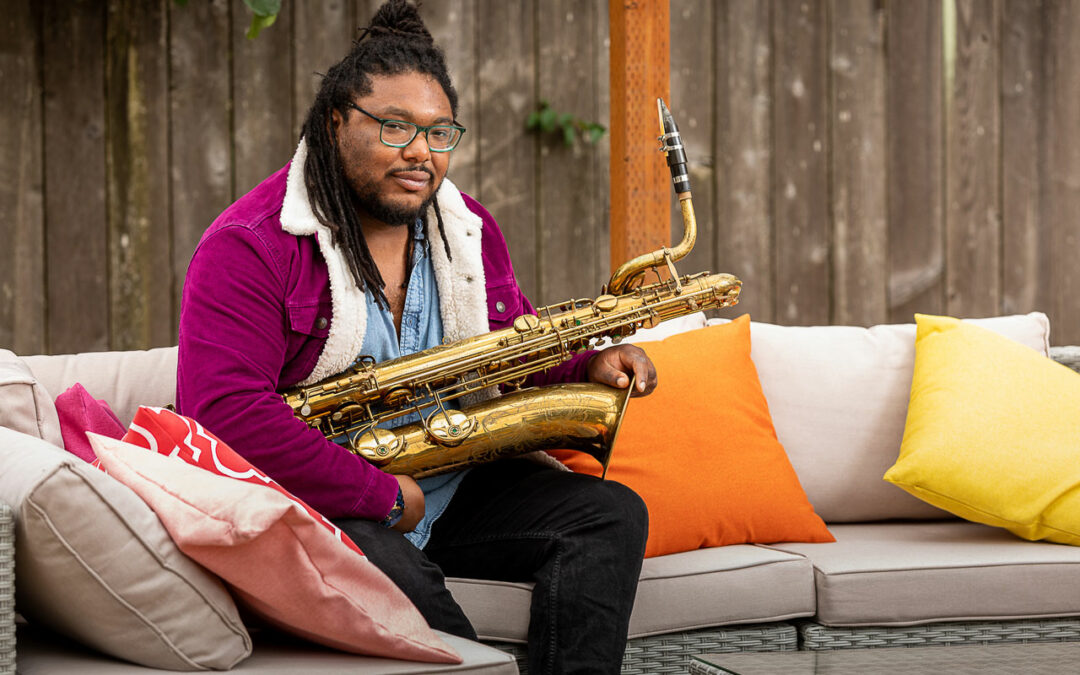 “A Mirror and Focus for the Jazz Community” is the credo that greets Earshot Jazz members and the public at large with every monthly edition of Earshot Jazz that lands in mailboxes and populates racks and tables in coffee houses throughout the city. It was what initially popped into the mind of Alex Dugdale when receiving the call from Executive Director John Gilbreath informing him that he had been chosen to be Festival Artist in Residence for the 2022 Earshot Jazz Festival. He knew that he wanted his program and his contributions to reflect the immense talent and diversity of the Seattle jazz scene that had surrounded him and embraced him as an artist.

How to best utilize the image and focus of the Seattle jazz community was another matter. His mind swelled with all the projects, and notions of projects, he had conceived without having the proper opportunity and facility to bring them to fruition. It appeared that opportunity had actually arrived.

“I’ve had a bunch of ideas for groups that I’ve wanted to do and tunes I’ve wanted to arrange. I have original compositions that haven’t had the right opportunity to be presented in the dream context; it’s literally a dream come true. These dreams I’ve had of putting on a big tap concert, a big band concert, of putting together a rockin’ party band, Earshot is giving me the opportunity to make those dreams come true,” says Dugdale.

Dugdale draws from a skillset that mainly concerns the saxophone and the art of tap dancing. He has occupied both the lead alto and baritone saxophone chairs of the Seattle Repertory Jazz Orchestra (SRJO) and thrilled Seattle jazz audiences with his Fade Quintet, which features his tenor playing. Yet, it was his feet that initially enraptured Earshot members, performing tap during the annual SRJO/Earshot presentation of Duke Ellington’s Sacred Concert. Thus, fully employing his own talents, and those of the scene that had essentially raised him as an artist, would take some serious forethought.

Dugdale ultimately decided on four programs to be presented at this year’s festival: two at the Forum at Town Hall, and, somewhat surprisingly, two at the Sea Monster in Wallingford. In going both formal hall and neighborhood, he felt he was putting a focus on his everyday life as an artist in Seattle and on the musical souls that surround that daily grind.

The second installment, “What We Have on Tap,” on October 28, features Dugdale as a tap artist, performing with pianist Dave Meder and his trio. Meder, who attended the Eastman School of Music with Dugdale, provides a musical context that incorporates the tap artist as an improvising soloist within the band concept. This reflects Fade Quintet performances in which the artist’s solos are both of the saxophone and tap dance variety within the hard bop idiom. It was a concept that emboldened Dugdale to take tap out of its limited historical context and move it forward as his own dance skill set continued to evolve. It was tap that made him fall in love with jazz in the first place. “I think like a horn soloist when I tap dance. As I grew more musically on my instruments, I was able to make sense of my skills with my feet and turn that into music. I had a lot of chops in my feet, but I wasn’t saying anything,” he recalls vividly.

Dugdale will invite other tap artists to join for an evening unlike any other in the vaunted history of the Earshot Jazz Festival.

Dugdale returns to the Forum on November 1 for a concert featuring a 19-piece big band. Featuring a commissioned piece written for the festival, as well as compositions written by Seattle friends, the performance will include full band arrangements of the music of Marina Albero, which Dugdale arranged and performed with Albero and the Roosevelt High School Jazz Band during the pianist’s residency at the 2021 Earshot Jazz Festival. It was that assignment that allowed Dugdale to gain confidence as a large ensemble composer/arranger, after initially finding the project somewhat intimidating.

Dugdale’s “Festival Wrap” completes his residency November 6 at the Sea Monster, featuring his sextet in full-on, hard bop mode. It is there that festival patrons can see the artist in his “natural state,” so to speak, tearing things up on alto and tenor and injecting tap solos into a musical style reminiscent of Art Blakey’s Jazz Messengers. Dugdale will be joined on the front line by trumpeter Jun Iida.

To think of his name archived historically alongside previous holders of the festival residency such as Jay Thomas, Jovino Santos Neto, Marina Albero, and Dawn Clement is a phenomenon he describes as “mind-blowing, humbling, exciting, and nerve-wracking.” He adds thoughtfully, “I’m honored to be a part of this now.”

In the end, dealt with a hand of four aces, Dugdale will continue to formulate his answer to the question of what jazz music means to him. His residency provides the tools, to perhaps, better facilitate the response. “I know it when I hear it; it’s something you feel. I want to experiment with that feeling.”

Alex Dugdale: What We Have On Tap
October 28, Town Hall Forum