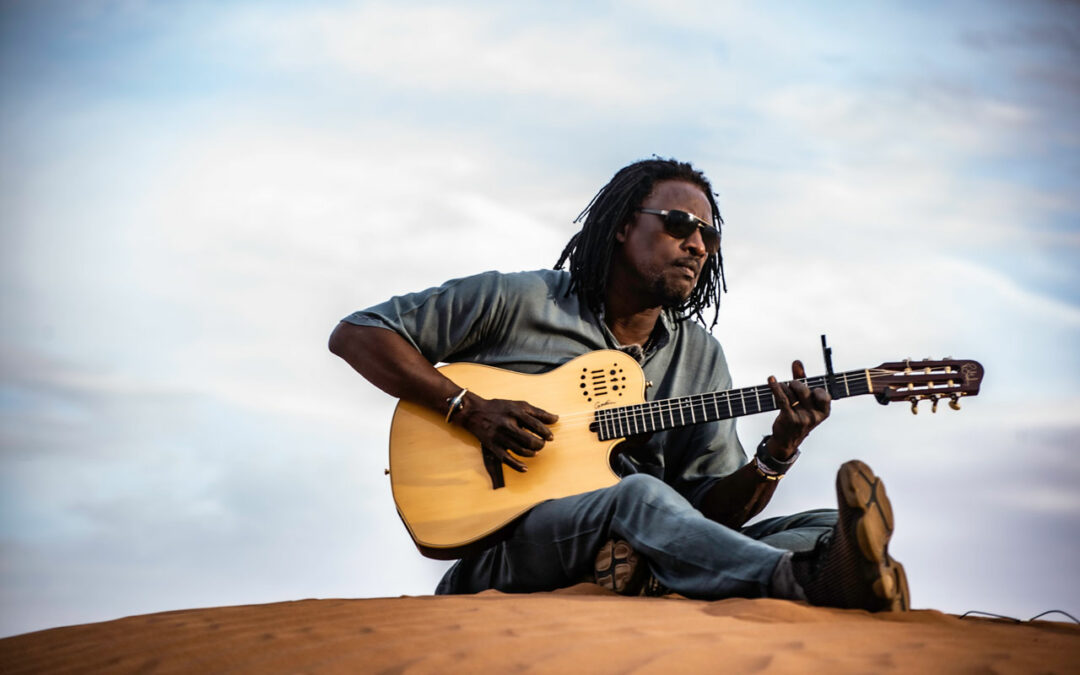 A descendant of Mali’s Khassonké griots, the mesmerizing guitarist and singer Habib Koité carries on the legacy of his ancestors as musical storytellers, historians, and entertainers but in his own way. He broke from tradition by tuning his guitar to a pentatonic scale and playing on open strings, like the ngoni. His rhythmic approach is based on the danssa, a popular rhythm from his native city Kayes. Koité calls his version danssa doso, a Bambara term he coined, combining the name of the popular rhythm with the word for hunters’ music (doso), one of Mali’s most powerful and ancient musical traditions. The power of his music propelled Koité towards international recognition as a leading figure among Africa’s pop stars. For decades, he appeared in front of enthusiastic audiences across the continents, sculpting his unique approach to creating songs that intersect Mali’s rich and diverse musical traditions with Western rhythm and blues, rock, classical, and folk. Intrinsically steeped in blues and Afro-Cuban music, he collaborated with American bluesman Eric Bibb, expanding on another facet of his roots in Malian music. The duo performed over 120 concerts in Europe and the United States since the release of their album in 2012.  Koité returns to Seattle in celebration of his recent release Kharifa, his sixth studio record, accompanied by his band Bamada, which he founded over 20 years ago. Recorded in Bamako, the capital of Mali, the album features outstanding guest artists such as the great kora player Toumani Diabaté, Koité’s son Cheick Tidiane Koité, and Amy Sacko, the lead singer of Bassekou Kouyaté’s group Ngoni Ba. Its message revolves around love, but Koité interlaces it with stories of enduring human suffering in his country, nonetheless offering hope, optimism, and wisdom. Kharifa means “what you are entrusted with,” portraying life as a series of sacred personal responsibilities—taking care of other human beings, the community, the planet. Embodying pluralism, Koité sings in four of his nation’s indigenous languages plus French and English, highlighting his unwavering efforts to promote unity among sometimes antagonistic ethnicities. His fans have waited years for Koité to return to the recording studio. He is a perfectionist, dedicating much time to composing and arranging his material. This performance will mirror his resolute creative spirit.