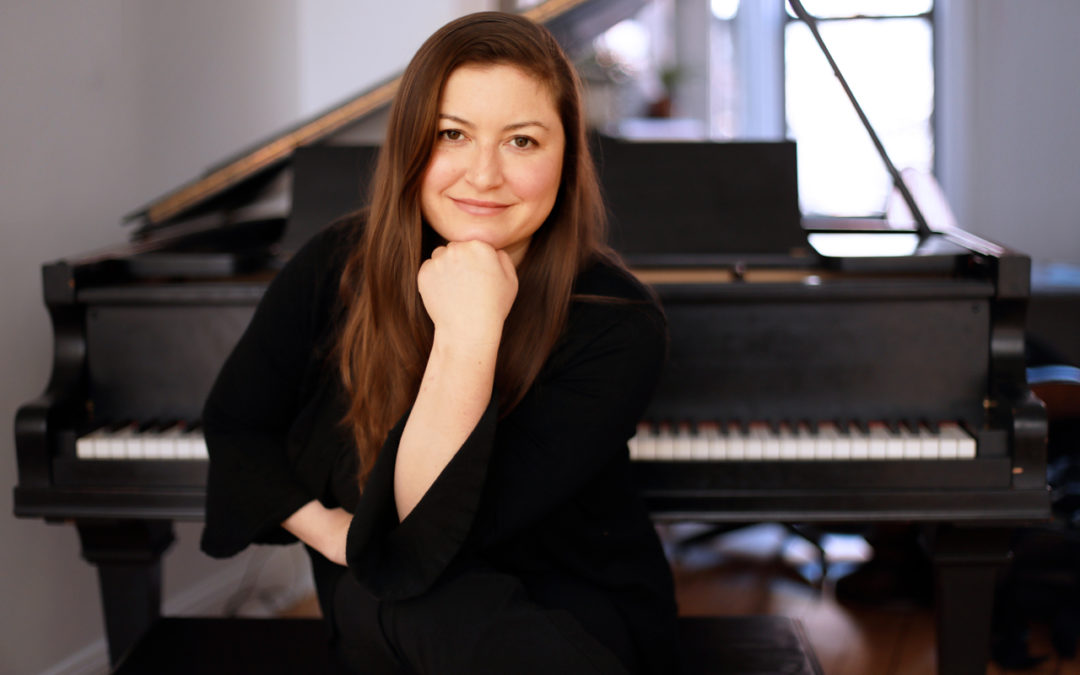 In normal times, a Seattle-bred musician like pianist Carmen Staaf might be profiled for Earshot to ballyhoo a hometown show. But these are not normal times. While live concerts may be back soon, the real story right now for the wildly blossoming career of this 1999 Garfield High School grad is her presence on a huge variety of wonderful recent recordings.

For starters, there’s her substantial contribution to vocalist Thana Alexa’s dazzling, Grammy-nominated Ona (which lost this year to Kurt Elling’s Secrets Are the Best Stories).

“Thana is a great vocalist,” said Staaf in a phone interview from her home in Brooklyn, where she lives with her fiancé, pianist Julian Shore. “The experience of playing and recording with her has been a really deep one for me.”

It shows. One of the highlights of the album – a warm swirl of jazz, folk, pop and world music celebrating not only women but our shared humanity – is an elegy Alexa wrote for her late brother, “Set Free,” which Staaf propels with oceanic emotion. In a May 2020 cover story for Down Beat about Alexa and her husband, Antonio Sanchez, the singer said: “I lost it in the middle of [Carmen’s] solo. I was feeling totally fine, and then she started playing. It felt like she was playing my grief.”

In addition to Ona, Staaf has also teamed up twice over the past three years with drummer Allison Miller, once for the eponymous album, Science Fair, voted “Best of 2018” by the New York Times, and again on 2019’s delightfully playful Parlour Game. And those are just the better-known discs. There’s also Day Dream, a fabulous 2017 recording with vocalist Nicole Zuraitis; a new pair of albums this past spring that includes an engagingly experimental collaboration with saxophonist Dan Blake, Da Fé, and Occasionally, an aptly titled album of songs written for friends, with Boston alto saxophonist Pat Donaher; Bloom, from 2019, led by drummer Jeff Williams’ trio and another album with the same lineup, with Staaf as leader; and Woodland, released last year on the audiophile Newvelle label.

Throughout this impressive body of work, Staaf plays with a sensitive touch that runs the gamut from impressionistic to percussive. She credits, among others, two mentors from her studies at the New England Conservatory (NEC) –Michael Cain and Danilo Perez – as well as six-months of study in Cuba, during her 1999-2000 “gap year” between Garfield and NEC.

“There was a softness that could border on a carefulness to my touch before,” she says, “and I think that between going to Cuba and studying percussion there and studying with Danilo, I found a more percussive touch. Not that I mean to imply that a sensitive touch isn’t part of Danilo’s playing – he’s just an incredible pianist – but one thing he can do is get sound out of the piano.”

Staaf not only gets sound out of the instrument, she plays it with a keenly focused intention. Everything feels like it has purpose and meaning. Both that touch and sense of purpose are on full display on tracks such as “Ready Steady,” on Science Fair, “Black Smoke,” from Occasionally, or “The Grifter,” on Da Fé.

Surprisingly, one of Staaf’s earliest influences as a kid was Errol Garner, whose sense of momentum clearly has been a through-line in her development.

“There’s so much joy, it’s just infectious,” she says of Garner. “That push and pull between his right hand and left hand. That really got me.”

In 2009, Staaf won the piano competition named for Mary Lou Williams, another vintage player who has been an inspiration over the years. After the pandemic began, Staaf found herself returning to Williams’ Zodiac Suite as a model for a suite of shorter pieces she has been writing “that have to do with some aspect of this experience we’re all having.”

Experience, indeed. Staaf has survived the COVID-19 scourge reasonably well, staying healthy while also developing a robust virtual teaching career and receiving grants through the Jazz Coalition and other organizations. But like everyone else, she’s pretty much been stuck at home. A recent live-streamed record release for Onawas her “first gig in a year where there was an audience watching at the same time.”

Before COVID, Staaf was set to hit the road with Dee Dee Bridgewater, for whom she now serves as Musical Director. Unfortunately like everything else, that tour bit the dust. In the meantime, the Sunnyside label is interested in a follow-up Science Fair album. Additionally,Staaf and Miller have been working on a recording together.

“Hopefully, we’ll get back to touring with Parlour Game and Science Fair and all these other bands.”

In the meantime, hometown fans of Carmen Staaf can enjoy hours and hours of listening to her albums.