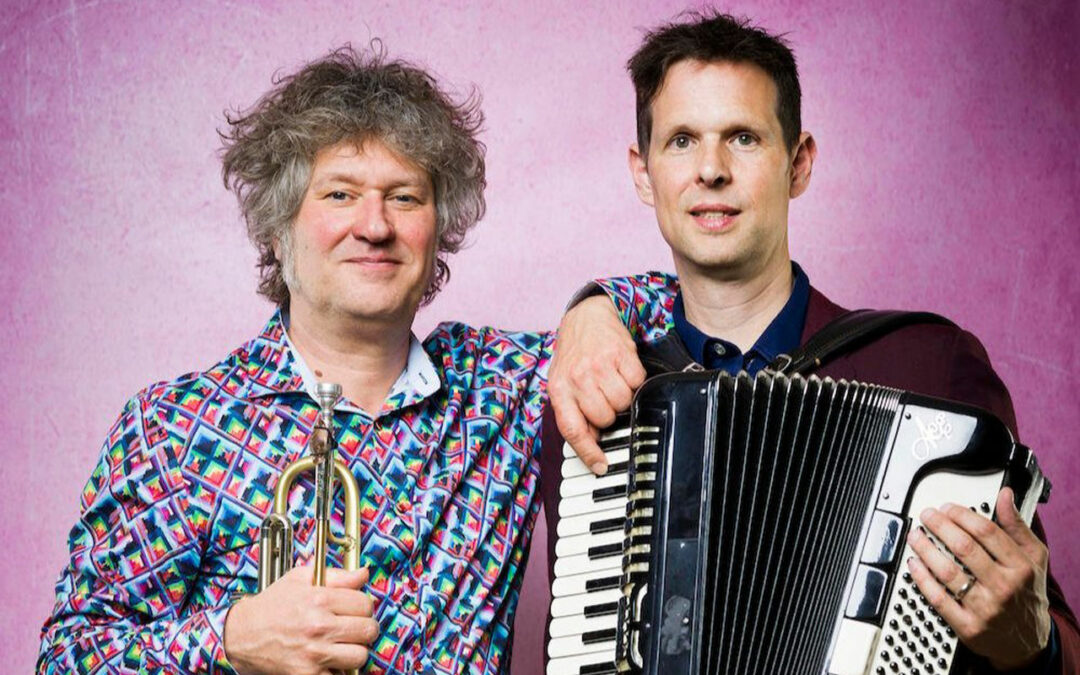 Erik Vloeimans and Will Holshouser photo by Merlijn Doomernik

“Jazz” is a term far too narrow to define the ever-expanding sonic palate of Dutch trumpeter and composer, Eric Vloeimans. Combining aspects of bebop and rock music with Dutch free improvisation sensibilities, Vloeimans plays with a unique and often velvety, whispering tone. This warm and inviting sound pairs effortlessly with his fondness for melody and lyricism, regardless of genre. A favorite Vloeimans aphorism sums up the restless nature of his musical searching, “I make music for millions, but I haven’t reached all of them yet.”

While Vloeimans’ catalogue is wide-ranging and covers fertile grounds over many genres, his playing remains rooted in his classical and jazz studies at the Rotterdam Conservatory, as well as time spent pursuing his craft in America under the tutelage of Donald Byrd, and as a member of the big bands of Frank Foster and Mercer Ellington. A sampling of Vloeimans’ recorded work finds his playing accompanied by string quartets, electronic beats, symphony orchestras, woodwind groups, and more traditional jazz settings. Similarly, his compositions can be heard in a multitude of musical environments and unique ensembles. Vloeimans has a natural flare for producing highly creative and memorable recordings as well as live performances with small ensembles, often with unusual instrumentations. His work includes scoring “soundtracks for imaginary films” with accordionist Tuur Florizoone and cellist Jörg Brinkmann, while his electric band, Gatecrash, has been compared to electric Miles.

Mirroring Vloeimans’ eclecticism and contributing his own sonic zest, Brooklyn-based accordionist, Will Holshouser, has an equally diverse set of musical interests. A chance encounter with an old squeezebox in the late 1980s led the young music student off the beaten path and into experimentation with various types of folk and world musics. This eclecticism, in combination with Holshouser’s natural fun-loving expressiveness, has found him performing around the world in a true diversity of settings. Holshouser’s own group, Musette Explosion, has recently made the Billboard Jazz Charts and been featured on NPR’s “Fresh Air.” He has been heard with jazz musicians such as Regina Carter, Han Bennink, Michael Moore, and Uri Caine, as well as musicians from folk and traditional genres such as Suzanne Vega, Andy Statman, and Loudon Wainwright III. He has also collaborated with major institutions such as New York City Ballet, New York City Opera, and the Brooklyn Philharmonic. Holhouser teaches at Brooklyn College and previously studied with Anthony Braxton, Dr. William Schimmel, and Bill Barron, amongst others.

Far from a one-off meeting, this intriguing duo is continuing years of collaborative history. As a follow-up to their 2008 release, Eric & Will, Vloeimans and Holshouser recorded a series of live performances touring around the Netherlands in 2021, which was recently released under the title, Two for the Road. This record features a series called “Intermission”, composed by Vloeimans during the lockdown, and Holshouser’s “Redbud Winter,” which was commissioned by the American Accordionists’ Association. Listeners can expect a satisfying blend of challenging and familiar elements as whistleable tunes meld into soundscapes, folk elements drive rhythmic pulses, and melodic and inventive playing rule the day. Eric Vloeimans and Will Holshouser will play The Royal Room on Sunday, October 2. Tickets available at earshot.org.